Despite the siege of White-fronted Geese into south-east England recently (see here), things locally have had a very end of season vibe: there’s not much to play for and I’ve become quite lazy in my birding. For now at least, I’m still not keen to go further than other parts of Surrey (even though a day on the Kent or Norfolk coast appeals) and with the short days, options are limited. That said, there has still been bits to see and it’s certainly shaping up to be a better winter than the last few years.

A crisp, cold morning with clear skies. No frost, but very chilly as I met Dave at Pudmore long before dawn in the hope that a White-fronted Goose may be in with the roosting Canadas and Greylags. Sadly, there wasn’t, and I missed Dave’s Redshanks pair he had in the darkness. Three Lapwings were nice though and a sign of movement. I then walked Shrike Hill and South Bog (avoiding the ongoing bunting-fest at Ockley!) but saw little, save 1,000 or more Woodpigeons moving overhead and 23 Crossbills.

I then did a sweep of some sites for goose flocks, checking recently cut crop fields and other areas I’ve seen geese recently. Alas, no white-fronts, but with Dave and Sam also checking locally it was satisfying to know plenty of ground was covered. I did get my goose fix, though, twitching Mark’s flock at Betchworth – only my second county record. It was quite a surreal spectacle: hundreds of geese on estate parkland in the Surrey Hills, with the evocative yaps of White-fronted Geese sticking out amid the assorted sounds of Egyptians and various hybrids. 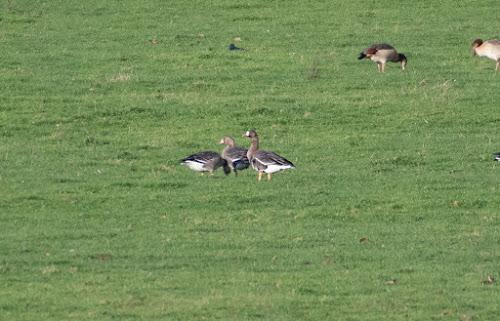 In total, I tallied 47 White-fronts – well up from the 18 yesterday, meaning more had arrived overnight. The birds were distant but could be viewed easily. Some 89 Egyptian Geese was easily my highest total of this species anywhere in England; 450 or more Canadas, some 200 Greylags and a Barnacle Goose were also noted. An angler marching through the flock and the white-fronts – all the way from the remote Russian tundra – casually waddling away added to the bizarre nature of the occasion. Other bits included a Sparrowhawk and a Kestrel.

A cold start but not enough for a frost. I visited Thundry Meadows first thing, recalling that geese often get on the meadows back towards Elstead. Two Greylags and 41 Canadas were all I could manage in that department, though. A flock of 60 or more Siskins patrolled the alders and a Grey Wagtail flew over.

I checked Snowdenham Mill Pond before heading home. Two Mute Swans were my first here since October, but more impressive was some 18 Gadwall – my second-highest mill pond count. Given the paucity of other locales in south-west Surrey that host this species, it’s quite bizarre. I’ve seen Gadwall on 43 dates this year; 34 of those have been at the mill pond, with the remaining nine at four other sites, three of which were one-off records. Strange …

A quick check of the Thorncombe Valley waterbodies in cold and grey conditions. Bramley Park Lake and Snowdenham Mill Pond were quiet, though eight Gadwall were still at the latter site. Things were similarly steady at Winkworth Arboretum, but 10 Coot and seven Little Grebes represented decent counts. As has been the case at a few places since the start of December, a Stock Dove was singing. Three Reed Buntings flew from their reedbed roost at Rowe’s Flashe, a Lesser Redpoll zipped over and a flock of Siskins were roving around.

A lunchtime walk around the fields at Painshill Farm felt particularly wintry in cold and gloomy conditions. Plenty of thrushes were about, including a flock of close to 80 Fieldfares and Redwings feeding on rosehips along the main hedgerow. At least 14 Blackbirds were present too. Adult Lesser Black-backed and Common Gulls flew over and a Bullfinch was heard, but perhaps the bird of the walk was a showy Treecreeper working up and down a series of oaks.

I need Smew for my county list and poorly-watched Thorpe Park was a reliable spot until a few years ago, so I was at this site mid-afternoon to see what was knocking about. No Smew, unsurprisingly, or any Goldeneye, but I did count an impressive 170 Pochard and 200 Tufted Duck on Manor Lake, where 50 Gadwall and 12 Wigeon were also present. Some 31 Lapwings flew over and I heard Siskin, Green Woodpecker and Chiffchaff. I checked the fields at Mill Lane, Thorpe, where I saw a Tundra Bean Goose a few years ago, but there were no white-fronts – just 60 Canada Geese.

I met Dave at Island Barn Reservoir a little before sundown to do the gull roost. This featured nothing of note, though 10 or so Great Black-backed Gulls were a sight for sore south-west Surrey eyes (see here)! The juvenile Great Northern Diver that’s been about a couple of weeks was present at the west end, covering impressive distances underwater – only my third in the county. Eight Wigeon and a drake Pochard were about, Grey Wagtail and Jay were heard-only and a Kingfisher flew over the jetties. 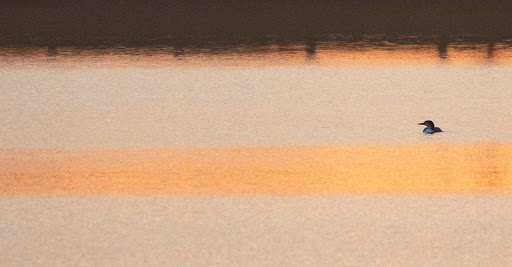 I did a quick check of Snowdenham Mill Pond mid-morning – to get out the house as much as anything – and, upon my arrival, was very surprised to see a female Shelduck swimming around in the mist. A classic case of expect the unexpected, this rather unhappy looking bird constituted only the second record for the site – and the first since 1973! It’s also the 11th duck species I’ve seen on this impressive little waterbody. Seven Gadwall were also on present and a Siskin was heard. 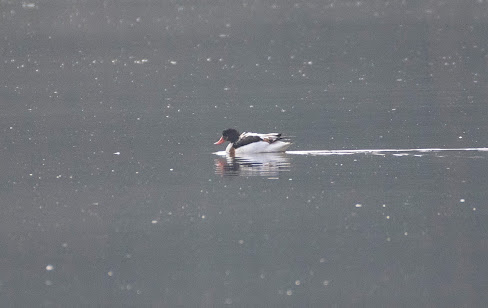 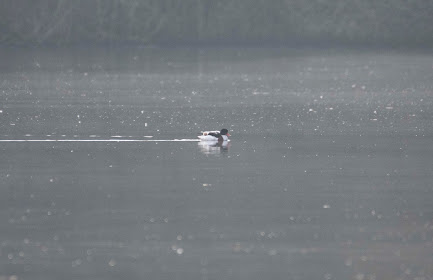 Wednesday 9th
I quickly checked the mill pond before work. To my surprise, the Shelduck was still about, feeding merrily away. Its continued presence left me a bit sceptical as to its origin, but it had no rings, appears fully-winged and – perhaps most handily of all – is a first-year (based on the white trailing edge on the secondaries). So it should be given the benefit of the doubt. Some 18 Gadwall was another high count, two Egyptian Geese were loafing and 13 Greylags flew south.
Thursday 10th
The Shelduck was still on the mill pond first thing, loosely associating with the Mallard flock and feeding happily. Some 15 Gadwall were present and a Wren was singing. At Cutt Mill, again there was a lack of Goosander – very few seem to be back at winter haunts in the south-east and sightings here have been sporadic. A Mute Swan on the house pond was my first at the site since September 2016. On the way home, I checked a few recently harvested fields between Shackleford and Elstead, only managing Canada and Greylag Geese and large numbers of corvids.
Posted by Ed at 05:27