The last week has been largely decent, despite a mixed bag of weather. It is now that time of year when watching the forecasts and trying to use them to your benefit in the field can pay dividends, but you get the sense everything is upside down in 2021. So, I’ve been going for a more relaxed approach, just going outside when time allows and enjoying what’s about.

It was unseasonably dull and grey for my first visit to Tuesley in a few days, which was immediately brightened up by the presence of a juvenile Little Ringed Plover. This species has lots of character, particularly young birds. It was a relaxed individual, foraging away among the Pied Wagtails on the shore. Surprisingly, only my second in south-west Surrey this year … 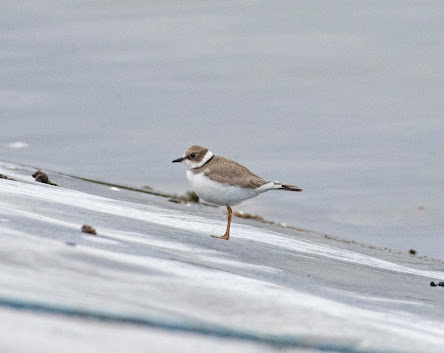 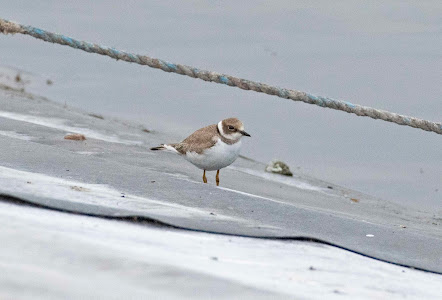 I soon flushed a brown warbler from the grassy bank and it flew silently into cover. My initial thought was Gropper, such was the behaviour, but a patient stakeout revealed it to be an adult Sedge Warbler. As mentioned recently, this species is rare around here and a treat when encountered on passage. I’ve actually had one at Tuesley before, funnily enough in the exact same bushes, in May 2016. Other bits included a Lesser Black-backed Gull over and a few Swallows through.

After the little run of north-westerlies, a switch to a gentle south-west breeze with full cloud cover resulted in a fantastic four-hour session at Shackleford. Of the 49 species logged, 10 were trapped and ringed. Amazingly this included the third and fourth site records of Sedge Warbler – caught at the same time after I’d espied one upon arrival. Both were juveniles and very smart in the hand indeed. 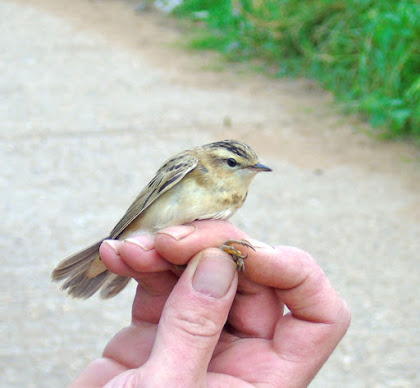 There were plenty of other signs of passage. The first two Whinchats of the autumn were in the southern alfalfa, a Wheatear was nearby, an elusive Redstart was in a hedgerow and a Tree Pipit dropped in briefly – all superb August content. Three species of hirundine included my first Shackleford Sand Martins of the year, at one point pursued by a Hobby. 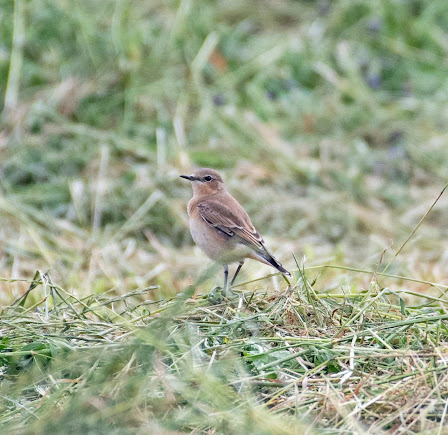 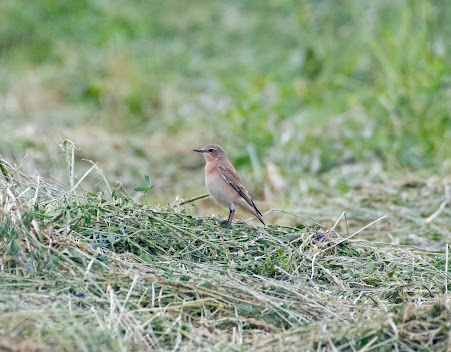 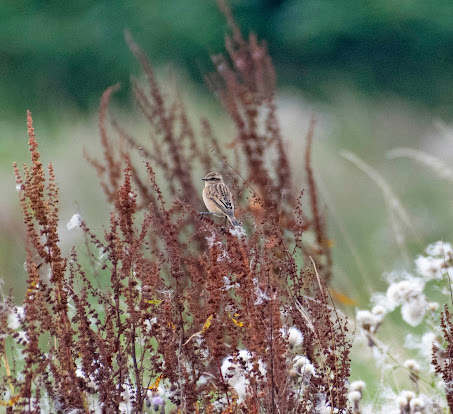 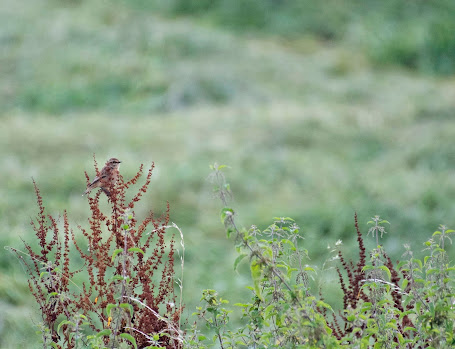 A juvenile Willow Warbler, one of three on site, was also banded. I can’t get enough of these gems at this time of year and spent a while following one around one of the margins. Blackcap, Chiffchaff and Whitethroat all made it into the nets as well. 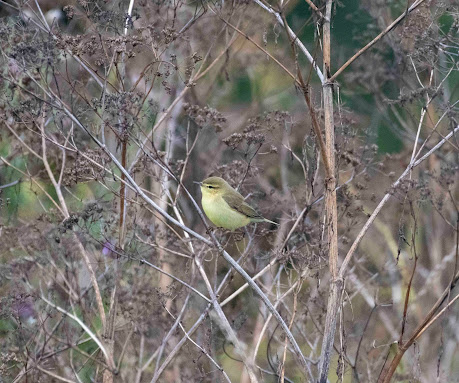 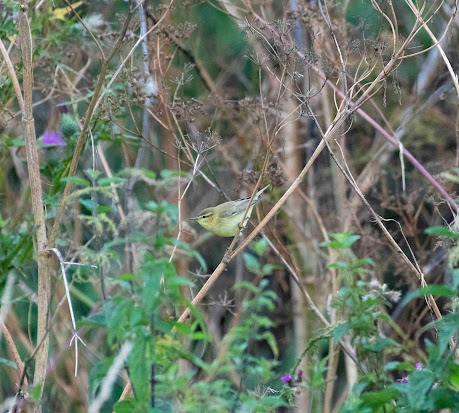 It was mild and still at Thursley first thing, with the forecast fog not materialising. As is often the case during a south-easterly it was a slow-burner, but eventually proved to be a decent three-and-a-half hours on site with 47 species seen. Pick of the bunch was a female Lesser Spotted Woodpecker sieved out of a massive mixed species flock east of Birchy Pond. 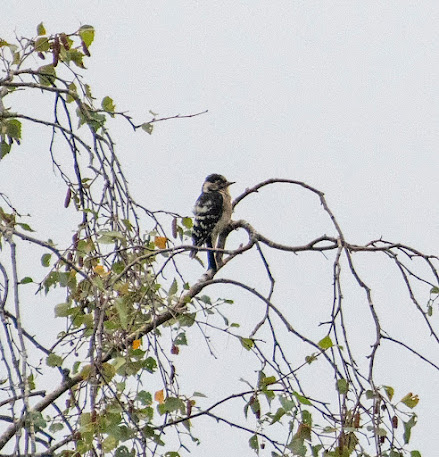 She was particularly mobile, but I eventually managed some record shots. The flock also contained a Spotted Flycatcher, several Willow Warblers and a few Blackcaps. A further three Spotted Flycatchers (an adult and two juveniles) were at Crossbill Corner. Other bits near Birchy Pond included a calling Water Rail and, to my great surprise, a Tree Pipit taking food in to a nest – extraordinarily late in the season. 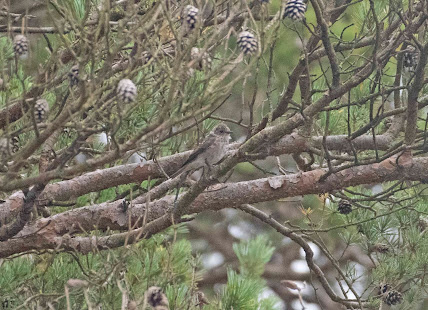 Other bits included my first local Yellow Wagtail of the season, typically heard and not seen as it flew over Francis Copse, which held a Bullfinch. A single flock of 12 Woodlarks were flushed near the tumuli, a Snipe was at West Bog and a Wheatear alighted on Shrike Hill as the rain set in.

A quick check of Frensham afterwards was tern-less, though three Swifts and two Sand Martins were of note. Later in the morning I walked the Lammas Lands just as the heavens opened, logging five Stonechats, four Reed Buntings, two Whitethroats and a Grey Wagtail.

In the afternoon, I was most surprised to see a Brown Hairstreak in the garden. I have no idea where the nearest population is and friends far more knowledgeable about butterflies than I agreed it was an unusual occurrence.

Sunday 22nd
It was bright and breezy at Shackleford in the morning, where an excellent session delivered the magic 50 species total – only the second time I’ve achieved that figure here. The clear highlight was an incongruous Green Sandpiper on ‘Dunlin Ditch’ (a small puddle in one of the fields). Typically it flushed straight away, but it must have re-landed at the other end of the farm as I saw it again in flight later on – some sandpiper-like footprints were also found on the edge of another small puddle. Shades of 29 August 2020 … 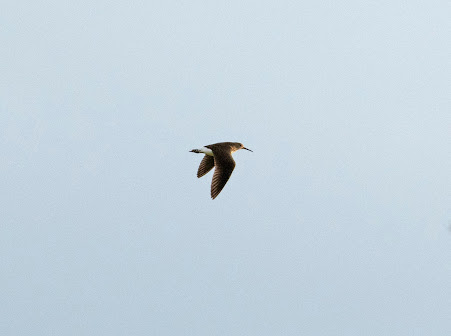 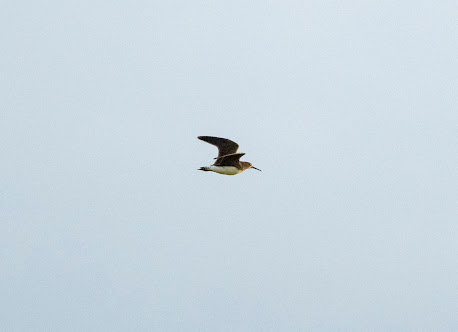 A Whinchat was with Stonechats in the one remaining margin, a Yellow Wagtail flew south-east and Starling numbers were up to an impressive 520 or more. Other bits that were handy in achieving the grand 50 total included three Little Owls, a juvenile Bullfinch, three flyover Cormorants, Ring-necked Parakeet, three Willow Warblers and a Hobby that shot through.
Visiting family in Sussex in the afternoon meant there was time for a quick walk of Sidlesham Ferry, where no fewer than nine wader species were on Ferry Pool, which is looking the best it has for shorebirds for a few years. Best of all was the lingering Temminck’s Stint, with Spotted Redshank, Greenshank and Common and Green Sandpipers also seen. A Yellow Wagtail flew over too.
Later on at my parents house, hundreds of larids feeding on a flying ant emergence included plenty of Mediterranean Gulls.
Monday 23rd
A few House Martins were over Farncombe mid-morning.
Tuesday 24th
The forecast blue skies never materialised at Thursley this morning, which was grey, dull and rather cold in the breezy north-easterly. Most of the action was at Pudmore, where the autumnal theme was boosted by a flock of 10 Teal (probably passage birds rather than local breeders) and a Snipe. A Yellow Wagtail in with the Pieds added a bit of colour, however, and a fly-through Redshank was a nice surprise, albeit fleeting. A Sand Martin and an increase in roosting goose numbers (including 91 Greylags) were also noted. 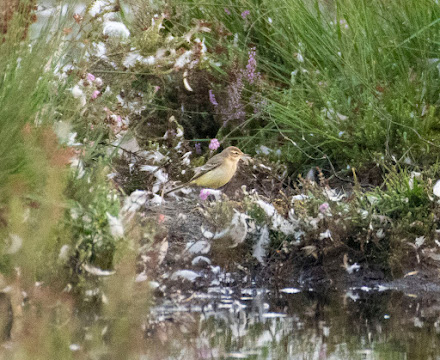 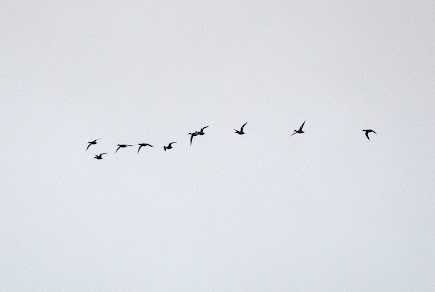 Despite four Spotted Flycatchers and a further 10 Yellow Wagtails (including nine that dropped into the Belted Galloway enclosure on Ockley) it was quiet elsewhere. In fact it seemed there had been a clear out of breeders – Stonechat numbers were greatly reduced, only singles of Willow Warbler and Redstart were noted and Woodlark and Tree Pipit didn’t make the checklist.
Later on in the morning I walked along the river, with the clear highlight a Whinchat at Unstead Water Meadows, where a Yellow Wagtail flew south (obviously a few moving today), a Reed Warbler was in a mixed species flock and a Bullfinch was near Perry Bridge. One Kestrel was knocking about, with another at the Lammas Lands, where four Stonechats and three Whitethroats were present.
Posted by Ed at 09:02