For a change, August ended without much of a bang this year, as a sharp north-easterly airflow more befitting of October concluded the month. The subsequent cool, grey days delivered little on the migrant front (although the Bank Holiday did deliver its annual local rarities) and were particularly poor for passerines. However, on several occasions I found myself wasting away time watching the common summer species, revelling in their presence before they go. After all, we haven’t had much of a summer to enjoy, so it’s worth appreciating these birds, which are departing in similarly unseasonal conditions to the ones they arrived in back in April.

Another overcast morning with the fresh north-easterly still firmly in place. A juvenile Common Sandpiper was a sight for sore eyes at Tuesley first thing – only my second of the autumn here (compared with birds on 34 days by this time last autumn!). Some 32 Egyptian Geese left roost too.

As a result of the weather, ringing at Shackleford was much quieter than last week, though 48 species across the site meant there was plenty to see. Six Whinchats included five that seemingly emerged from roost in the set aside before disappearing shortly after. A female-type Wheatear did the same. A light southward passage of Yellow Wagtails throughout reached 15, with some dropping in, though this was probably an undercount. 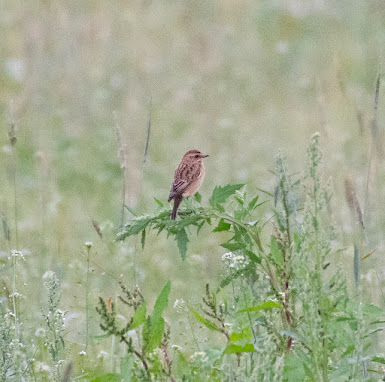 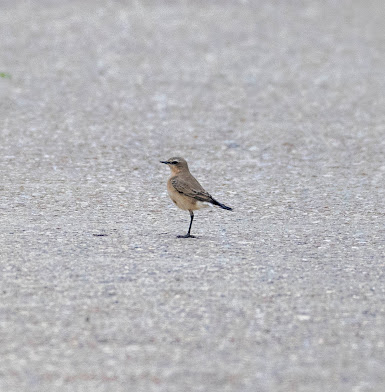 Three each of Little Owl and Cormorant, two Ravens, a few Skylarks and singles of Hobby, Willow Warbler, Sparrowhawk, Ring-necked Parakeet and Reed Bunting were also noted. A brief and very skulking Acrocephalus in the set aside was likely a Sedge Warbler but couldn’t be identified. An apparent clear out of Whitethroats had occurred too – one adult today compared with 15 birds (mostly juveniles) last week.

It was incredibly gloomy at Tuesley early on, with the now strong north-north-easterly making for a cold session. The Common Sandpiper was still in situ and I managed a new personal high count for Egyptian Goose (44) at this site.

The wind had dropped a touch and it was a bit brighter, but it still felt like October at Tuesley. The juvenile Common Sandpiper was about, seemingly having made friends with the local Pied Wagtails. A young Stock Dove seemed rather unwell and was exceptionally tame on the southern bank. At one point it actively tried to land on the water … a group of Yellow Wagtails dropped in as I was leaving, so I retraced my steps to go and appreciate them. An adult male and female with four juveniles may have been a family group. Delightful birds. 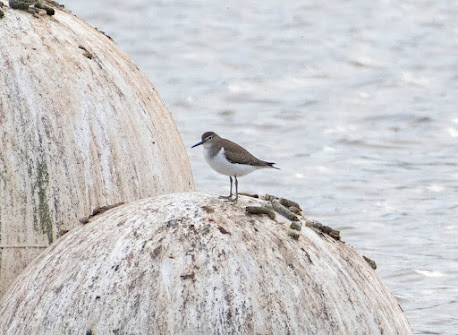 There were about five Yellow Wagtails at Shackleford afterwards, as well as a decent showing of six Whinchats. No Wheatear, though, which seem thin on the ground this autumn. Two Willow Warblers were also noted and, interestingly, Blackcap outnumbered Whitethroat (two to one) – a very rare occurrence here when both species are present. Other bits included six Ravens and singles of Kestrel, Little Owl and Ring-necked Parakeet.

I concluded my morning by walking the Lammas Lands. My quest for a Whinchat here goes on, but I did note a male Stonechat feeding young and a close-knit family group of Whitethroats – crazy scenes given it’s nearly September. A Yellow Wagtail flew south – only my second Lammas Lands record – while Kingfisher, Kestrel and four Reed Buntings also made the checklist.

A lazy start was interrupted by a message from Shaun P, which had me racing down to Frensham Great Pond. There, I was pleased to see that the adult and juvenile Arctic Terns he’d earlier found were still present, flying around and occasionally landing on the buoy (showing their very short legs, a feature not often seen in Surrey!). 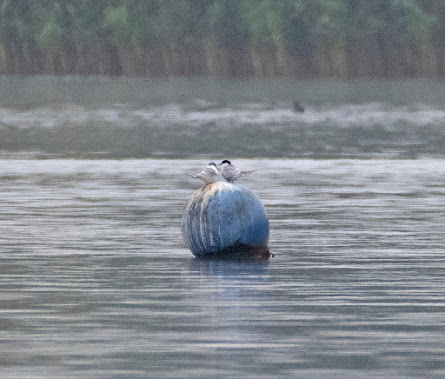 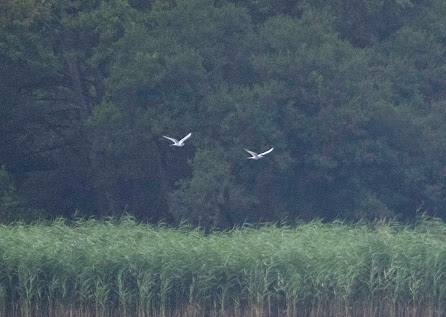 Arctic Tern averages perhaps one record every two years in south-west Surrey, almost exclusively at Frensham and usually in the spring. So, this was a nice way to kick off the Bank Holiday weekend and my 149th local bird of the year. Four late Swifts, a Kingfisher, two Grey Wagtails and a Reed Bunting were also noted.

Despite the uninspiring weather I decided to do a long walk along the High Weald Ridge to Dunsfold, starting at The Hurtwood. Bizarrely, I managed four species new for me here, all flyovers: Feral Pigeon, Lesser Black-backed Gull, Raven and Reed Bunting. A female Crossbill was very much of note and a Mistle Thrush was my first in south-west Surrey this month! A Spotted Flycatcher and three Bullfinches were also present.

Hascombe Hill was up next, after a Kestrel was espied at Hascombe Place Farm. On the hill itself a couple of Ravens and two Sparrowhawks were knocking about and a Siskin flew over. A mixed flock near Cobblestone Cottage held a Willow Warbler and a male Firecrest. 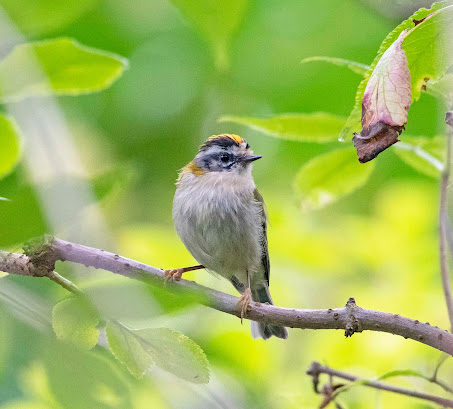 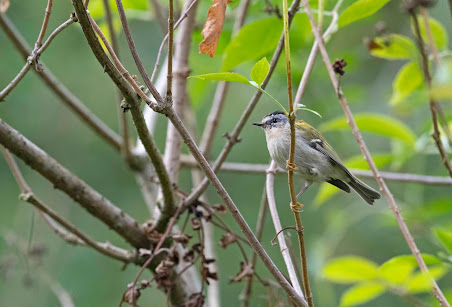 The sun eventually came out at Painshill Farm and, with it, the birds. Two Yellow Wagtails south was a good start, but the best action came along an unsuspecting hedgerow which held a female-type Redstart, a juvenile Whinchat and a Willow Warbler. At times, the former two species posed together. Classic August scenes. 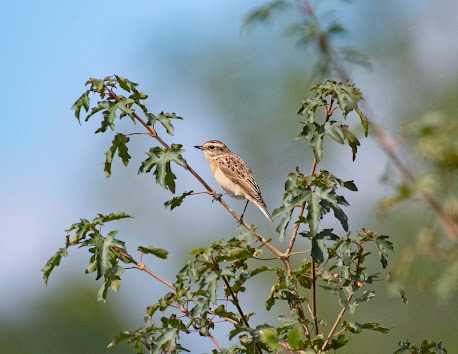 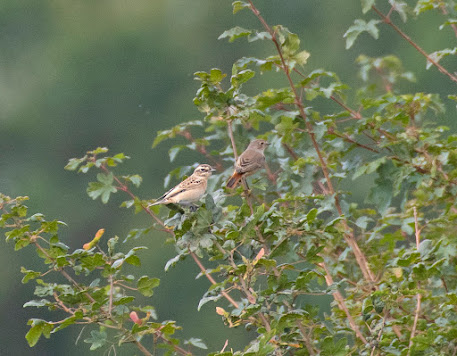 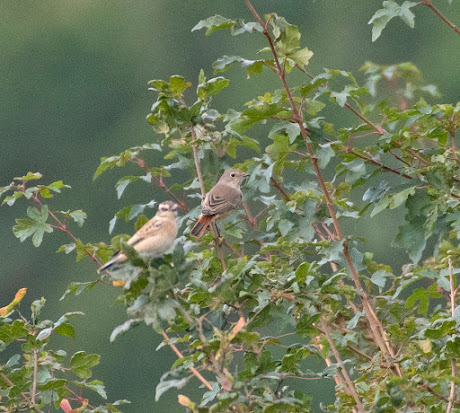 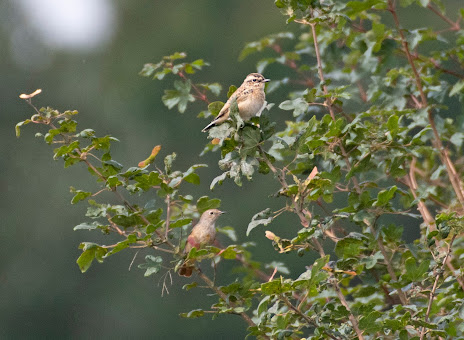 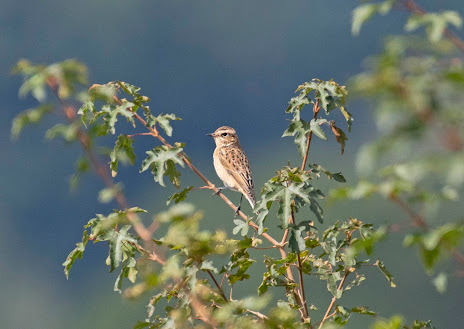 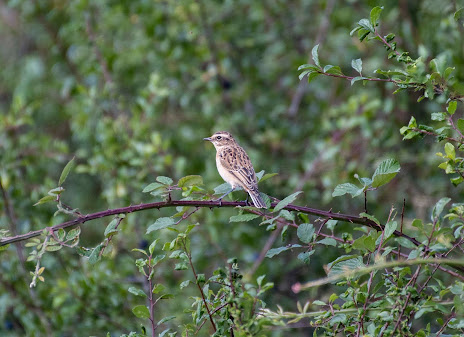 Other bits included singles of Raven, Kestrel and Sparrowhawk, a flock of 85 Linnets, Red-legged Partridge, four Whitethroats and a House Martin. A quick look at Snowdenham Mill Pond on the way back revealed the family of Mute Swans, a drake Gadwall and a few Mandarin.

It was a lovely and sunny late August morning at Shackleford, where a walk with Dave produced 43 species. Best of all was a Grasshopper Warbler flushed from Cuckoo Corner – impressively Dave’s second of the morning following one he found at Thursley earlier. Three Spotted Flycatchers along a hedgerow in the northern fields were my first of the year here. A Weasel, two Whinchats, a male Wheatear, Willow Warbler, Little Owl, five Stonechats and a Coal Tit helped make for a very pleasant jaunt.

Buoyed by the promise of yesterday I was tempted back to Painshill Farm, but it was much quieter in the now warm late morning conditions. A late Swift highlighted, with a Yellow Wagtail flying south and two Kestrels, a Sparrowhawk and 31 Red-legged Partridges also seen.

Another grey and windy morning had rolled in as I checked Tuesley early on, where the Common Sandpiper was still present.

I then chose to walk Thundry Meadows. As I approached part of the riverbank I heard a familiar ‘plop’, then obtained the briefest of views of a rodent swimming away from me, before I lost it beyond the dense vegetation that separated me from the water. If I was along the Arun, I wouldn’t think twice that it was a Water Vole, but this species is thought to have been extinct in Surrey for 10 years.

Some people I’ve spoken to think this isn’t the case and that a few small and undetected populations may persist. My observation was a possible at best – it could have been something else (my small mammal game is not strong!) – but this is surely the type of quiet riverine habitat with lush vegetation and high banks that could support the species. Who knows …

Avian action as quiet, though a Tree Pipit and three House Martins overhead was a sign of movement. A Little Grebe was on the Wey, three Mandarin flew upriver, six Siskins were in the alder carr and an impressive 170 Mallards were feeding on the meadows.

Later on, two Swifts – perhaps my last of the year – flew over Alfold Football Club, as did a female Sparrowhawk. Two Lapwings near Dunsfold Aerodrome were my first locally since 20 July.