The summer that never happened

After the excitement of August’s opening period, things have slowed down as the unsettled nature of this year plays catch up. Birding has been good, but there's no mention of Common Sandpipers, Wheatears or Whinchats in this post. Instead, disconcertingly late breeding behaviours have been observed, such as Spotted Flycatchers still on eggs, second Swallow broods fledging (with adults looking to go for a third clutch), warblers feeding young and recent fledglings of species usually well finished by now. From passing migrants to local breeders, I suspect things will be a good couple of weeks behind schedule across the board, following a summer that never really happened.

There was a light mist at Thursley early on, though it quickly burned off. I’d just got to Pudmore when I picked up a lumbering silhouette heading south over Ockley: an Osprey no less. It cruised on in leisurely fashion before I lost it behind Spur Wood. An adult, presumably it was returning back south from (likely failed) breeding grounds and had roosted here overnight, like one I had in September last year. Ospreys are always special to see locally. 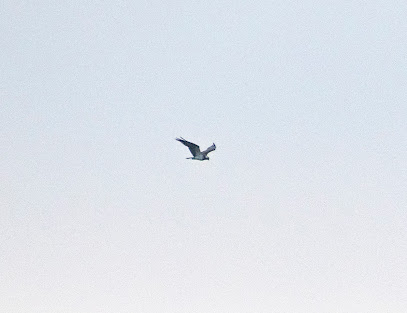 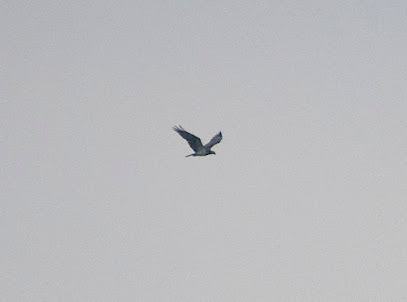 The site was soaking after the relentless rain of late but there was still plenty to see, including adult and juvenile Spotted Flycatchers at Crossbill Corner, excellent numbers of Stonechats, some 221 Canada Geese from the Pudmore roost and a young Kestrel near the tumuli. A classically August mixed species flock was near Birchy Pond and contained one Garden and six Willow Warblers.

An hour at Frensham Great Pond was fairly quiet, though a Spotted Flycatcher in a mixed flock near the hotel was nice to see. Singles of Kingfisher, Sparrowhawk and Reed Warbler were also noted, along with 27 Great Crested Grebes and three each of Sand Martin and Common Tern.

It was disappointingly drizzly at Shackleford for ringing. Nine Whitethroats were the only birds in the nets, though it did highlight what a healthy population there is here. An adult and juvenile Lesser Black-backed Gull (the Farncombe birds?) flew south, a Red-legged Partridge was in the northern fields and two Reed Buntings were about.

A female Sparrowhawk flew through the garden in the morning.

It was misty on a morning walk through the Thorncombe Street south section to Painshill Farm. At times it felt more like mid-June, with lots of recent fledglings noted and not one bird that could pass off as a migrant. Good numbers of young finches were at Painshill, including Greenfinch, Linnet and Bullfinch, where two Kestrels and singles of Yellowhammer and Hobby were also seen.

It was a grey and dull morning for a walk of Puttenham Common. Two adult Dartford Warblers feeding juveniles seemed rather late but was nice to witness. Most of the action came east of General’s Pond, where a big mixed species flock contained three Spotted Flycatchers and a juvenile Willow Warbler; singles of these two species were also seen along Murtmoor Lane. A Redstart briefly sub-sang and a Tree Pipit flew over – my first shpeez of the season.

Afterwards, a quick check of Shackleford sprang into life when a juvenile Marsh Harrier flew low and slow over the Lone Barn track upon my arrival. The bird was receiving a barrage of abuse from the local corvids and, despite trying to settle twice, was eventually ushered off the site some 10 minutes later, departing high south-west (presumably the same bird was seen over Thursley Common at 11 am). 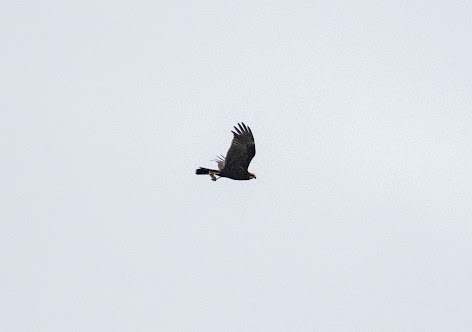 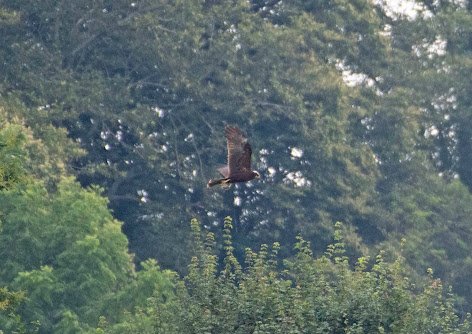 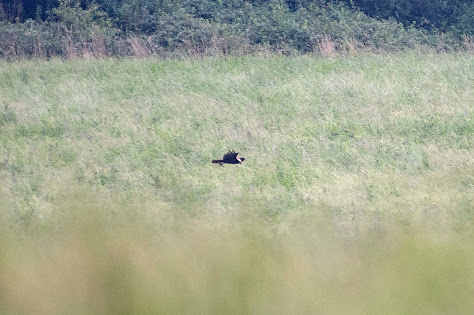 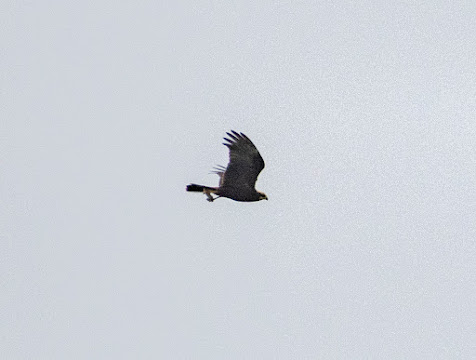 This species is always exciting to see around here and this is the first in Surrey I've recorded down low and ‘in habitat’ (normally local records involve high-flying birds). Perhaps this individual roosted overnight, attracted by the type of habitat you could expect to find breeding pairs in Europe (and indeed now parts of the South-East). Whatever the case, a quality encounter. It was otherwise quiet – still no Wheatears – though a Raven flew south and four Stonechats, a Red-legged Partridge and a male Kestrel were about.

Four Swifts and a Sparrowhawk flew over Walton-on-Thames in the afternoon.

I walked Thursley early on, accruing 44 species during a bright and breezy walk. A Reed Warbler calling from the Pudmore reedbed was a nice surprise and my first of the year here, while two Little Grebes and a flighty Teal were on the water. Cricklestones held Hobby, Spotted Flycatcher and a flyover Grey Wagtail, two Kingfishers and a Mandarin were at Forked Pond and a very young Stonechat was opposite tumuli.

At the end of the walk I flushed a silent Tree Pipit near South Bog. This was my first sighting on the common for more than a month – a maximum of four territories of this declining summer visitor were mapped at Thursley this summer and I personally have seen zero evidence of successful breeding. Go back 40 years to 1981 and the Surrey Bird Report documents no fewer than 52 Tree Pipit territories at this site …

In the morning, four House Martins were seen still visiting nests in Godalming.