A change of scene

I've hammered local birding pretty much non-stop for the last few years. After a particularly energy sapping 2020, this year has been a bit of a slog on patch and I decided a while ago I wanted to have an 'autumn off' the local grind. So, this week is the first of hopefully a few this season in which I'll be elsewhere, enjoying a change of scenery (bar one trip to Wales I haven't left England for 20 months). I've happily accepted I might miss a Surrey mega or patch blocker while I'm away and to be honest it feels quite unburdening. Bring on the next few weeks!

It was cold and misty first thing at Thursley, though eventually the sun came out. Vis-mig was rather light – 80 or more Meadow Pipits through south early on and a similar amount of Swallows in the same direction were of note, as was a single flock of 25 House Martins (amazingly my first record of the species here this year!).

A couple of Tree Pipits went through with the mipits – my third record at a third local site in the last four days, suggesting the typical late August / early September peak for this species is taking place later this year. Other bits included 12 Egyptian Geese on Pudmore, a Woodlark briefly in song, a flyover Grey Wagtail and a young Kestrel hunting around Shrike Hill. 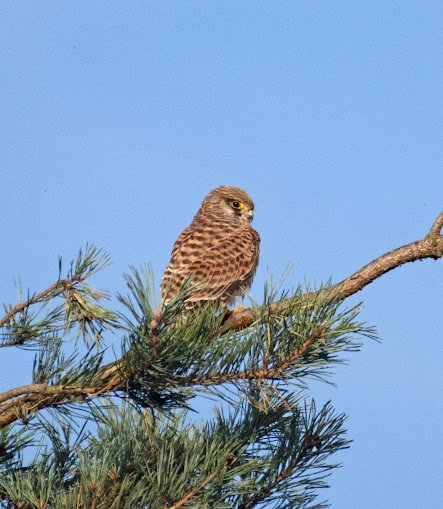 News of Surrey's first Corn Bunting for more than four years broke at midday, and I just had time to get to Beddington to be taken on a chaperoned walk onto the private part of the site the bird had earlier been seen. Sadly there was no sign for the assembled twitchers, though it was nice to be back in the 'inner sanctum' of this famous site for the first time in several years.

Peregrine, Sparrowhawk and Kestrel were all noted, as well as two Wheatears, a Green Sandpiper and a Whitethroat. A few Wigeon were distantly seen on Northern Lake too. As for the bunting, it seems likely the odd wanderer from the western Kent / eastern London populations must make it into the far, un-birded corners of north-eastern Surrey. Maybe something to try during the winter …

It was overcast and gloomy at Shackleford in the morning. For the first time this autumn Skylarks and Meadow Pipits were flocked up in the northern fields but today, unlike on this date last year, there was no Short-toed Lark with them. I reminisced for a while – that lark really was the type of find that should have been reward for many years of patching such areas and I thought today, as I did in the immediate moments after I'd found the bird, that such a mad occurrence will surely be my peak in terms of local discoveries.

Aside from the amble down memory lane it was very quiet. It must have been a month or so since I last failed to note either Wheatear or Whinchat here, as was the case today, though singles of Yellow Wagtail and Swallow went through and a male Kestrel was patrolling the hedgerows.

Frensham Great Pond was similarly quiet afterwards, though a drake Pochard was on the southern shore, avoiding the gaggle of wild swimmers, and a Kingfisher zipped by. A handful of Siskins, two Swallows and a House Martin flew through too.

A glance out the kitchen window late morning revealed a Kestrel being mobbed by two Jackdaws.

It was drizzly and grey at Shannon Airport, where Hooded Crow, Rock Pipit and a group of Sand Martins were noted before I met with Josh and Dan. On the drive north to Co Clare, a stop off at Caranavoodaun Turlough in Co Galway was productive, with a juvenile Wood Sandpiper very much of note here out west. Other bits included two hibernicus Jays, an adult Whooper Swan, a juvenile Black-tailed Godwit, two Dunlin and no fewer than 50 Little Grebes.

We then spent the afternoon working sites in south Co Mayo, starting at Lough Baun. On the beach here we couldn't pick out anything of note among hundreds of Sanderlings, Dunlin and Ringed Plovers. Despite the damp and dull weather, a few first-year birds of the latter species were practicing their display techniques.

We had better joy at the next site – Roonah Lough – where a peachy juvenile Curlew Sandpiper was in with some Sanderlings near the outflow stream. A Wheatear was on the rocks and a few Gannets were offshore. 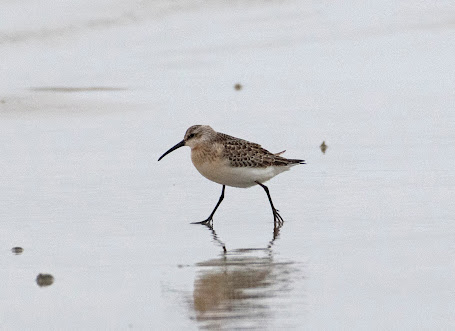 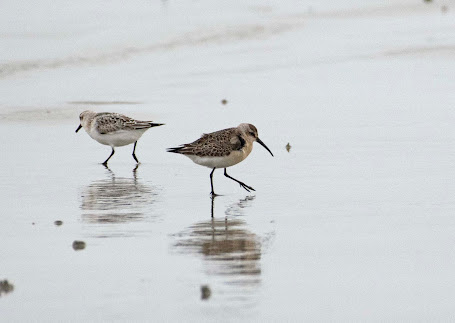 The sun came out when we reached Corragaun Lough, a site I really enjoyed. The other guys explored the lough itself, inadvertently flushing a wing-tagged adult White-tailed Eagle which I was able to get on at range. We later found out the bird had been born wild on the Beara Peninsula in 2016.

I worked the outflow stream and sandy beach, which was great fun under the blue skies with nobody around – this place would be heaving in England. A female Pale-belled Brent Goose proved surprisingly tame here, with a nice selection of waders including 27 Curlews, 18 Turnstones and a single Little Stint. 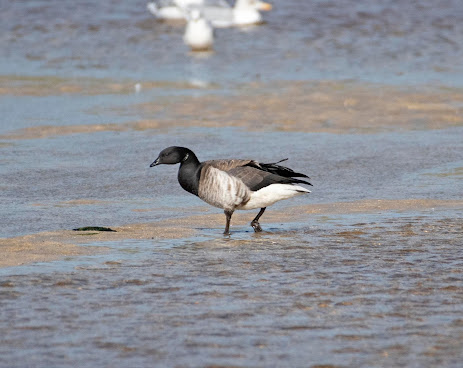 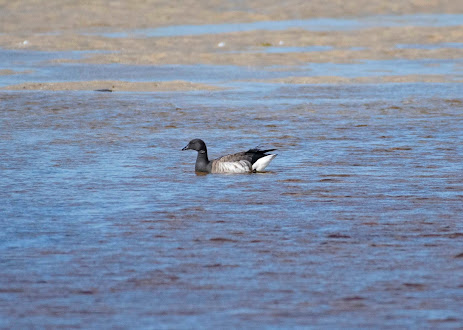 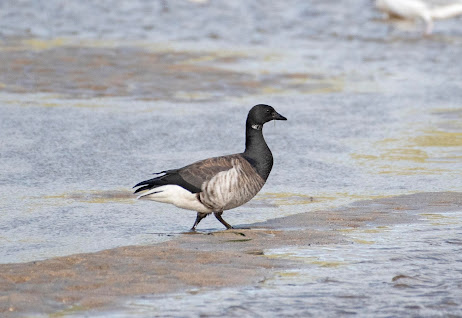 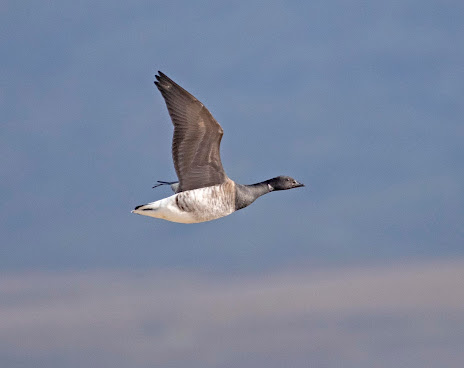 Nine Chough were roving around, four Stonechats were on the fences, 10 Shags were offshore and a first-winter Lesser Black-backed Gull was in with a big roosting Great Black-backed, Herring and Common Gull flock.

It was grey and breezy this morning at our digs for the next couple of weeks, Dooega village in Achill Island, at the western extremity of Co Mayo. A Yellow Wagtail was a real surprise to hear while I was working and I eventually pinned it down from the living room window, in with some Pied Wagtails and Meadow Pipits – a good bird this far west. I headed out late morning for a stroll around the village, noting a female Sparrowhawk, five Lesser Redpolls and a Stonechat while getting to know the area a bit.

In the afternoon we went to the far west of the island, which sticks out into the Atlantic. Keem Bay and Corrymore were quiet, with a Raven seen overhead, and by the time we got to Keel a heavy front had moved in. The art house gardens held four Goldcrests and a hibernicus Coal Tit, but we soon called it a day. A quick check of Keel golf course – where I saw a Semipalmated Plover in 2018 – produced two Dunlin.

A calm and bright day – a rarity out west. I walked the village and surrounds for a couple of hours in the morning, recording 33 species. The Yellow Wagtail was still about but otherwise I saw not a single migrant – par for the course on such rarity hunting grounds, where the 'all or nothing' and 'when it's quiet it's really quiet' caveats apply greatly. There was still plenty of content that's novel for the Surrey birder, though, including four first-year Shags on the jetty, 29 roosting Turnstones and 35 Rock Doves.

We headed out late afternoon, stopping by at Dooagh where a Pink-footed Goose was feeding in some fields. This bird has been present since 19th and may even have been the same individual that was here last autumn. Two Sandwich Terns and 12 Greenshanks were the best from Achill Sound and Corraun Shore afterwards.