I know I’ve mentioned it a few times, but what an odd year 2021 has been. A long old winter, a cold and wet spring and a soaking summer have rolled into a frankly bizarre September – this past week I’ve seen a crazy cocktail of species, from Swift, Sedge Warbler and Swallow to Pintail, Pochard and Golden Plover. In keeping with the 2021 theme so far it hasn’t felt particularly great at any point, but even in this rather fallow and strange year the beauty of local birding can still shine through, as indeed it has done this week.

The warm weather broke down overnight, with a misty yet muggy southerly in position as I walked to Unstead Water Meadows and back after breakfast. There seemed to be more Robins around than usual and I counted at least 25 at the meadows alone, many of which were performing their peaceful autumn song. Presumably this species is on the move now, which would tie in with my noc-mig record two nights ago.

The most notable birds from a grand total of 40 were a Cetti's Warbler, calling in riverside vegetation, and a Firecrest in a mixed flock near Upper Unstead Farm. Nearly 100 Swallows and House Martins were foraging over the cattle herd and a handful of Blackcaps were skulking in bushes. Singles of Great Crested Grebe and Cormorant were at Broadwater Lake, where a Moorhen was guiding round a very small (and late) chick and two fine Canada x Greylag Goose hybrids were about.

It was overcast and gloomy at Thursley, where the mild southerly was pushing through the odd front of light drizzle. It was quiet – I only logged 37 species – and Pudmore didn't hold much save counts of 97 Greylag Geese and 55 Pied Wagtails. Migrants were thin on the ground with a Wheatear near Crossbill Corner the only obvious one; two Willow Warblers and a flyover Tree Pipit may have been on the move. Three Woodlarks and singles of Kestrel and Grey Wagtail where about, while a Kingfisher over the Moat was my first on the common this year away from Forked Pond.

A Firecrest was calling along the railway line in Farncombe late afternoon.

An excellent day out on the Selsey peninsula with Dave and Sam in largely warm, sunny conditions saw us yield no fewer than 106 species, a total we were very satisfied with. A little over seven hours around Pagham Harbour delivered a mighty 92 of these, with the highlight a first-winter Red-backed Shrike, present since 5 September, at the west end of the North Wall. 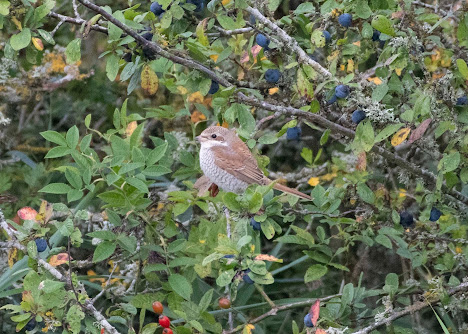 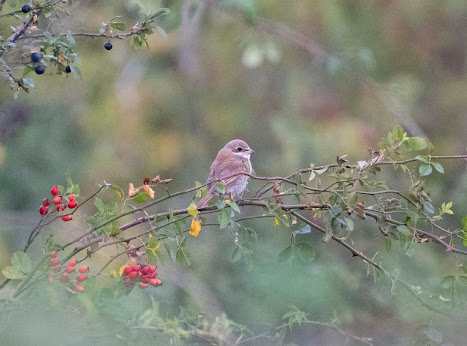 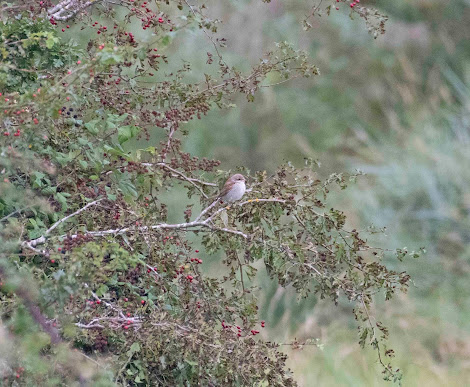 The North Wall and Halsey's and Honer Farms felt quite lively and passerine totals included two female-type Redstarts, Tree Pipit, three Whinchats, Lesser Whitethroat, three Willow Warblers, seven Wheatears and 25 or more Yellow Wagtails. Some 14 Cattle Egrets included youngsters still on the nest, while a Coot was swimming around with two very small chicks. Two each of Kingfisher and Sparrowhawk were also here. 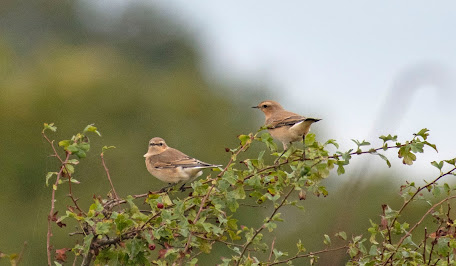 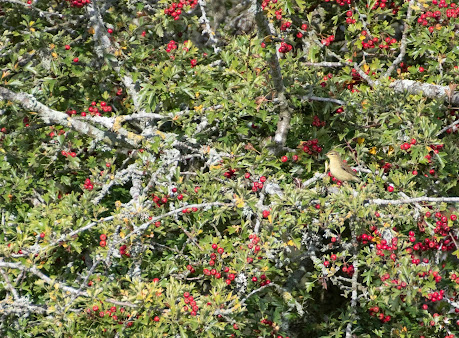 No fewer than 19 wader species during the day included a decent selection around the harbour. Four Knot, a female Ruff, two Turnstones, a juvenile Common Sandpiper, a handful of Grey Plovers, an odd, short-billed Greenshank (one of three) and stacks of Black-tailed Godwits were in among the commoner species from the North Wall. 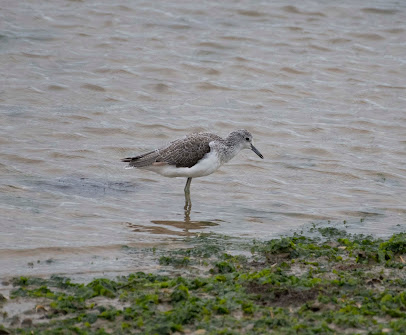 Ferry Pool was quiet, though six Spotted Redshanks were on Ferry Channel. Church Norton was a little off form as well, though two Spotted Flycatchers were at Glebe Meadow, five Wheatears were about and a Whimbrel was on the mud. Bits off Norton Spit included 14 Sandwich Terns and eight Gannets.

We were at Medmerry a little after 2 pm. Here we managed a species list of 70 in the following three hours which were truly fantastic – stacks of birds in lovely early autumn conditions. Moving hirundines (including 500 or more Sand Martins) and Yellow Wagtails were a constant throughout. Raptors were well represented too with a juvenile Osprey fishing on Ruth’s Marsh, a couple of Marsh Harrier cruising about and a minimum of 10 Kestrels patrolling the fields.

Passerine action was headlined by a Grasshopper Warbler we flushed from a grassy bank near Earnley Viewpoint, with two Whinchats and five Wheatears also noted. However, the best of the action came at Stilt Pools, where we were happy to pick out four Little Stints. Up to five were here in late August but there had been no reports since then. Despite the poor light we enjoyed good views of this diminutive Calidrid, which has had a bumper autumn (see here).

Other bits on Stilt Pools included a female Ruff, two Little Ringed Plovers, four Cattle Egrets, singles of Common Sandpiper, Avocet and Pintail, eight Egyptian Geese and a striking first-winter Black-headed x Mediterranean Gull hybrid. A squealing Water Rail on the way back to the car completed an excellent day in the field.

A couple of House Martins were still on Godalming breeding grounds in the early evening.

After a busy day of work, I decided to join Kit on his post-work trip to Pulborough Brooks. While driving through Bramley we were most surprised to spot an Osprey flying low south-west over the village. The bird, clearly loitering in the area and not on the move, was heading towards the Bramley Park Lake / Snowdenham Mill Pond area and is perhaps the one seen at Wonersh in late August. Amazingly enough, it’s the second time in three years I’ve seen Osprey from a moving car in Bramley! A little further down the A281 a flock of 14 Lapwings were noted in flight opposite Dunsfold Aerodrome.
Once at the brooks we headed to Hanger Viewpoint, where our quarry was soon espied: a Pectoral Sandpiper. The bird, a juvenile, was found yesterday and was hanging out with two Ruff and a Dunlin. As is often the case here it was stratospherically distant, but it was still nice to see only my third of this species (and first since 2016).
Other bits included a most unexpected two Swifts – my latest ever British record by seven days! A few Yellow Wagtails were in with the cattle, two Greenshanks were about, good numbers of winter wildfowl were on pools (I don’t think I’ve ever seen Pintail and Swift on the same day before … ) and a Firecrest was calling in the car park. Not bad for a couple of hours after work.
Tuesday 14th
Heavy rain set in overnight, with the wind hanging in the east. I hadn’t planned on going out today but such conditions tempted me to Tuesley – and I’m very pleased I went. I thought a new personal high count of 19 Little Grebes would be the headline maker after the first few scans, but then I picked up a distant, small Calidrid on the far shore.
Straight away I had a good feel for what it was but visibility was poor and I wanted to be sure. I crept round the side and my suspicions were confirmed – a juvenile Little Stint. I was buzzing – it’s been a bumper autumn for this species but I never thought one would turn up here. To boot, the immaculate bird was super tame, showing down to a few feet. Only born a couple of months ago in the High Arctic, it probably hadn’t seen humans before. A truly memorable encounter … I doubt I’ll find anything better this year. It is a shame this site is highly private but that's how it goes. 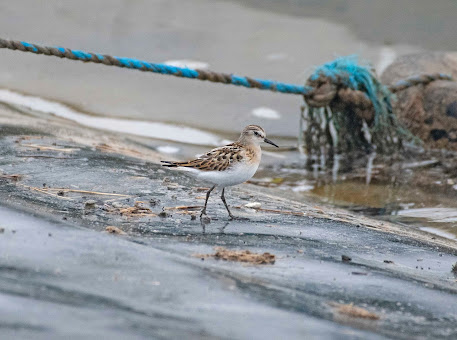 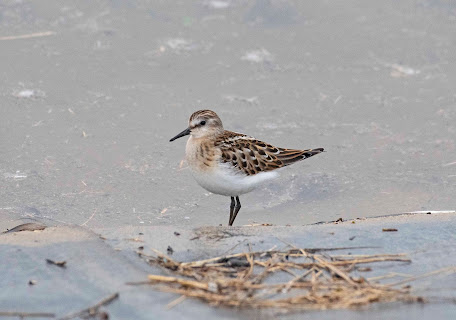 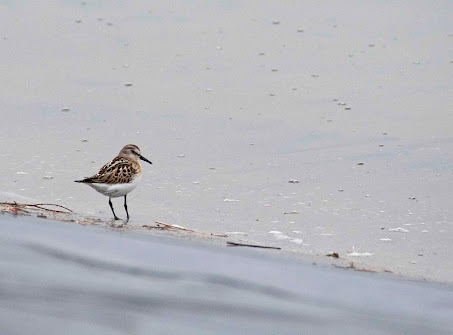 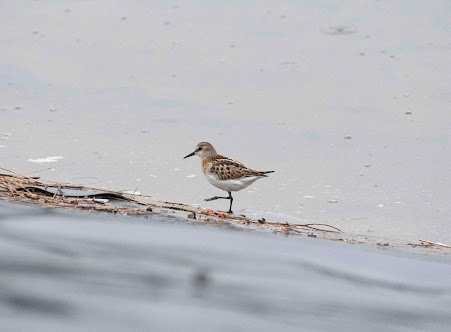 This was a site first and the first in south-west Surrey since May 1994. All seven of the previous local records have been at Frensham back when the beach wasn’t disturbed, emphasising the rarity of this species locally. Also, fittingly, it becomes 150 for my south-west Surrey year list. Prior to this bird there had only been two records since the Millenium anywhere in outer Surrey, both at Tice’s. Funnily enough, one turned up there later today – surely the Tuesley bird.
Inevitably being on site for so long meant other stuff was noted, with the best my first Tuesley Tree Pipit of the year, which circled for a bit then flew south. Eight Meadow Pipits, a Wheatear and a couple of Yellow Wagtails were about, singles of Hobby and Kestrel shot through and 25 Tufted Duck that flew in bumped up the count of the moulting flock to 76 – a new record.
Mid-afternoon I checked Frensham Great Pond, but the rain had cleared to high cloud with blue skies. An early female Pochard was a surprise on the south side and I counted a personal best 38 Great Crested Grebes. Interestingly I saw no hirundines whatsoever. A cursory check of Tuesley afterwards revealed that the stint had moved on …
Wednesday 15th
Ringing at Shackleford took place under dark, grey skies and a gentle northerly wind. Some 44 species noted during the session was pretty good, with the clear highlight a Golden Plover that bombed through north, calling manically as it went. A relatively early first of the autumn.
Yet another Sedge Warbler was around – the fifth of the autumn here (and third to be ringed). A Tree Pipit over was only the third of 2021, while 40 or more Meadow Pipits were in the alfala. Other bits included Whinchat, Wheatear, Yellow Wagtail, Little Owl, Kestrel, Ring-necked Parakeet and two Grey Wagtails.
Thursday 16th
No observations of note today.
Posted by Ed at 09:53