During this upside down year it was only fitting that we slipped from a cold and windy August into a warm and sunny September. To be fair, the fine conditions have only reached us during the last couple of days, but they’ve still conjured up a pleasant Indian Summer feeling, rendering thoughts of autumn proper rather distant. Indeed, it would be most on-brand for autumn 2021 to be mild and settled … as they have been all year, things have been steady this past week, but it’s been so refreshing to go out in the mornings and for it to be warm and lively.

September started how August ended – grey and gloomy. The Tuesley Common Sandpiper made it into the month and record counts for Tufted Duck (50) and Little Grebe (14) were pleasingly set. A few Sand Martins were swirling overhead and a Hobby zipped through, but the highlight came when two adult Ringed Plovers dropped in. Particularly vocal, they settled for less than two minutes before continuing on their journey south.

Frensham Great Pond was quiet afterwards, though it was nice to pick out two September Swifts among the large mixed hirundine flock. A Siskin flew east too.

A House Martin was heard from the kitchen window during the morning.

Mid-afternoon a female Sparrowhawk was espied from the kitchen window and, to my surprise, was being mobbed by three Swifts. Given their behaviour I wondered if they were perhaps very late local birds, though my last Farncombe Swifts were two weeks ago … this idea was reinforced when, in the early evening, a high flock of 11 birds were seen over a pub garden nearby.

The continuing north-easterly hopefully huffed one final puff this morning, with another grey and cool session. I started at Tuesley, where the Tufted Duck numbers were again up with 58 counted. Plenty of wagtails were feasting on the insects and were joined by a Whinchat – surprisingly my first here. A Wheatear was also knocking about. 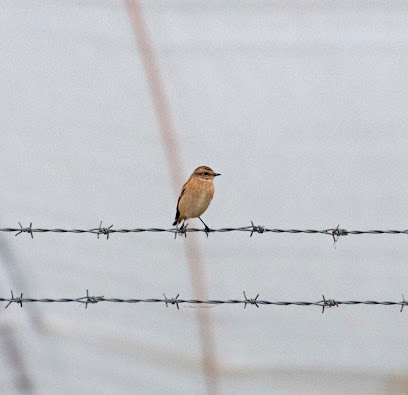 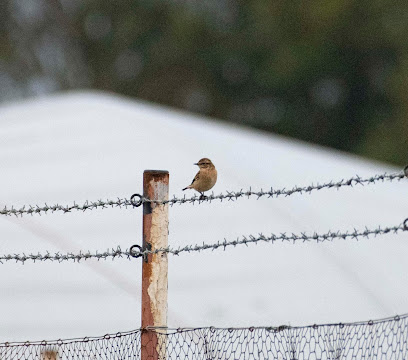 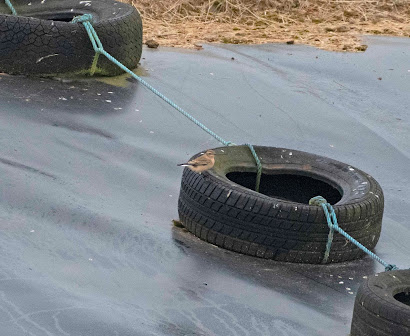 Shackleford was up next, where a relatively quiet hour-and-a-half session saw 37 species logged. Six Wheatears was a pleasing count during what’s been a poor autumn for them. Singles of Whinchat, Whitethroat and Grey Wagtail were of note and a Grey Heron was hunting in the alfalfa. 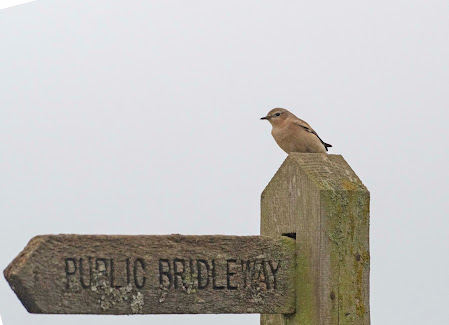 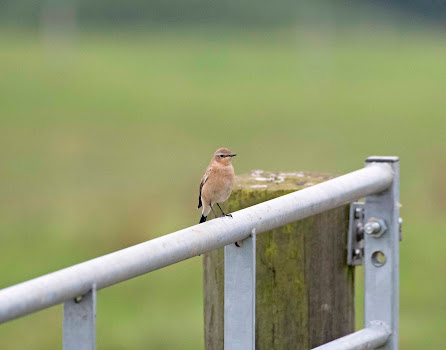 As I was contemplating my next move, news broke of two Spotted Redshanks at Tice’s Meadow. One of my easiest remaining Surrey lifers, the 15-minute drive outweighed the desire to one day find my own somewhere, so I headed over. The birds, both juveniles and found by Mark E, were feeding happily out in The Meadow but got gradually fidgety and departed high west about half an hour after my arrival. My 226th vice-county bird ...

Surprisingly rare in Surrey (one or two records a year about average, and almost always near London), these represented only the third Tice’s record, so there were a few disappointed people scrambling up Horton's Mound only to hear they’d flown. However, the supporting cast was nothing to be sniffed at, with a Great Egret (new in this morning), long-staying drake Garganey, five Greenshanks, Kingfisher and Green Sandpiper all about. I also counted some 236 Greylag Geese, four Snipe, 34 Lapwings and 75 or more Teal. 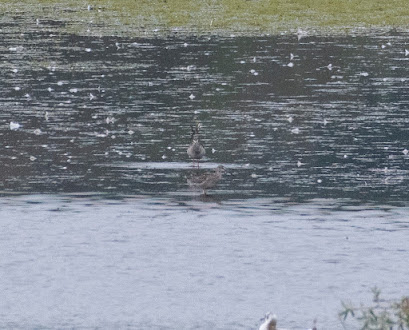 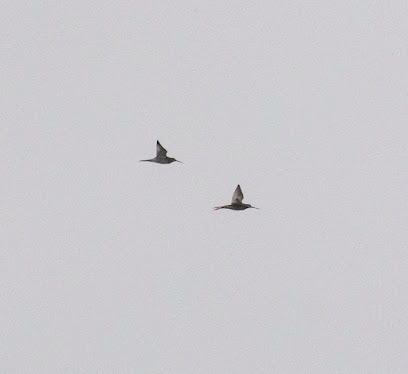 In the afternoon, a planned session at Painshill Farm was cut short by a noisy fleet of tractors tilling the fields. Another late Swift was notable, along with an impressive 150 Stock Doves on the newly bare earth and a juvenile Sparrowhawk. Chiddingfold Forest afterwards was ghostly quiet, though six Slowworms and two Bullfinches were seen.

The north-easterly had abated, swung round to the east and it was milder, less windy and, best of all, a bit birdy. I joined Dave for a big session at Thursley during which we had an enjoyable time, despite going relatively unrewarded compared to the scenes elsewhere in Surrey today (see here). Among 45 species were several (presumed) migrants including three Whinchats on Ockley Common, a Wheatear on Shrike Hill, seven Yellow and two Grey Wagtails and two Tree Pipits.

A juvenile male Peregrine was, amazingly, my first in south-west Surrey since 10 April – this is a highly localised breeding bird, with encounters far more regular in winter. At one point the local Hobbies mobbed the Peg over Pudmore. Other bits included two each of Redstart and Spotted Flycatcher, Bullfinch, three Willow Warblers, Kestrel and a decent count of 14 Cormorants. A couple of Graylings and six Common Lizards were also seen. 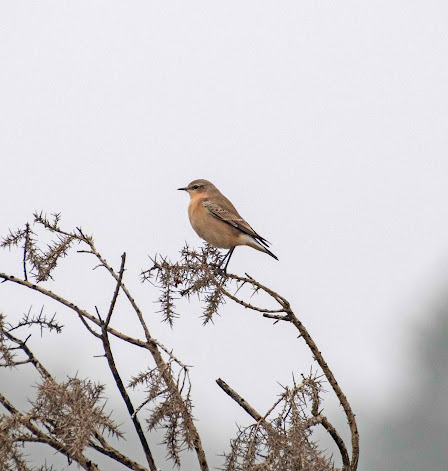 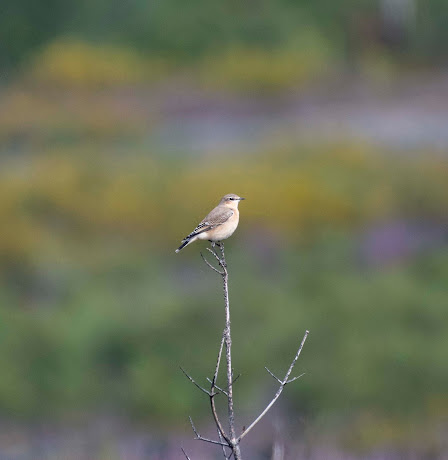 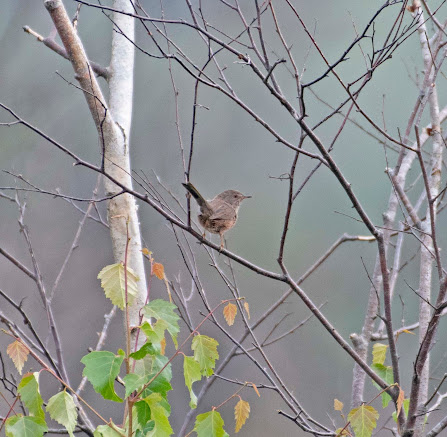 For the first time this autumn – and one of the few times this year – it felt properly birdy this morning in the warm sunshine. I was slightly limited for time, unfortunately, but still managed an hour-and-a-half at Painshill Farm where a good session was had, despite my inability to dig out the big one. Singles of Whinchat, Willow Warbler and Redstart highlighted, while three Yellow Wagtails flew over. Adult male and female Sparrowhawks were hunting, Stock Dove numbers were again into triple-figures, 70 or more Red-legged Partridges were about, a male Kestrel was on lookout and 110 Linnets roved around the fields.

It was warm and bright early on at Shackleford. Despite temperatures reaching 20 Celsius by the end of the two-hour session it was the first real indicator of autumn proper that highlighted – a Meadow Pipit, calling in flight over the alfalfa. My first of the season, with my last record locally back on 1 May (Mipit has been lost as a regular breeding species in south-west Surrey). Thoughts of misty vis-mig sessions are always conjured up when I hear my first of the autumn, even on this particularly summer-like morning …

Despite a lot of coverage there was a feeling this morning, unlike yesterday, that there had been a clear out overnight. I still managed Whinchat, three Wheatears and five Yellow Wagtails, but a late summer procession was the overriding feeling.

In the evening a noc-mig session at Shackleford was relatively quiet, though a few passerines were on the move including Tree Pipit, Robin and a flycatcher species. There was plenty of Little and Tawny Owl action too.

It was another warm and bright morning for ringing at Shackleford. The nets were relatively busy and included a juvenile male Reed Bunting that was just beginning to grow its distinctive head pattern feathers. The bird of the session, though, was yet another Sedge Warbler – the fourth of the autumn here, three of which have been in the same small margin. This bird eluded the nets but was watched foraging and preening at close range.

Two Whinchats also came close, one even sitting on one of the net poles. A Wheatear and four Yellow Wagtails were about too, and 100 or more Swallows moved east along the North Downs at dawn. A flock of 34 Greylag Geese flew west, while other bits included Little Owl, two Kestrels and Whitethroat. A Feral Pigeon that had been dyed pink gave a good bleeding-heart impression as it bombed east!